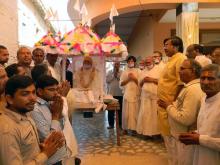 10 August 2015 held that the Jain practice of starvation till death to achieve salvation is illegal and is punishable offence under the provisions of the Indian Penal Code. The judgment needs reconsideration and need to be challenged on several grounds:

Santhara is the base , it is the principal of Jainism. Jainism , the most ancient and a scientifically precised Dharma of India. Closing/banning/criticising Santhara, is doing the same with a religion(jainism)